That title is most certainly something of a mouthful.  Inti Create’s newest addition to the line of Gunvolt games was playable at TGS today.  I just happened come across it and decided to jump in line, and am very glad I did.  Considering my love for all things retro, these kind of games really get me going in a good way.

The demo lasted about 15 minutes and was playable on the Switch only (at Inti’s booth).  Very similar to side scrolling shooting/platformers you start with a basic “shot attack” in the form of a photon laser gun.  What’s very nice is that you can shoot repeatedly just by holding the button down.  On top of a normal shot, if you use the dash button and hit an enemy they will become marked.  Once marked your shots will curve and home in on the target no matter where they may be on the screen.  The dash can be used not only horizontally and also diagonally as well.   However, when using a dash it will consume one “Bullit” displayed in the bottom left hand corner (see pic below).  In this demo Copen (the character I played as) only has 3 Bullits to start with.  By double tapping down you can reload the bullits, so it’s best to stay aware of this at all times.  Also in regards to movement, you can also hover and use “prevasion” (basically evasion).

In addition to normal attacks there are sub-weapons in the game.  Inti’s website also describes something as “Flashfield”, but this didn’t seem to be in the demo that I played or it wasn’t explained very well.  According to the site literature, a high-spec robot will revolve around Copen and create barrier to block “missle-type” attacks.  I also activated what seemed to be a special attack that initiated an anime cutscene and unleashed a massive amount of damage  onto the boss enemy in the demo (the red mech pictured below).  According to the website, EX Weapons can be gained by defeating bosses, but were not shown in the demo I played.  Also it’s said that Copen can gain new abilities and level up stats as well. 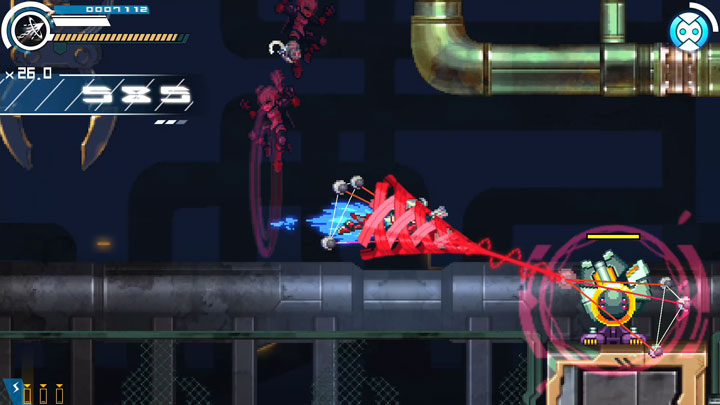 All in all, it was a fairly fast paced affair that really took me back to “simpler” times of gaming.  The game also looks really great and blends 2D pixel art with 3D particle effects for a nice blend of old and new.  If you’re a fan of Inti’s games or just love 2D action platformers, I really suggest checking this one out come 9/26/2019!

The Last of Us 2 Review